New Location for Youth Hunting in 2022!

Lottery entries will be accepted from Aug. 8 and close on Aug. 28, 2022.   No entry fee to enter.  Lottery participants must be a Stark County resident to register and attend a qualification session.  One entry per person.

Quail Hollow Park and trails will remain open during the fall and winter hunting season.   Park users are encouraged to wear bright colors and stay on designated trails.

A second location, Nimisila Preserve near Canal Fulton, will be added this year.  This property is not open to public visitation at this time.  This controlled hunting location will only be open to Youth hunters under the age of 18.  A youth that wins the lottery will designate an adult companion that will also be issued a permit to hunt.

Regionally and throughout the state of Ohio, changes in habitat and the elimination of natural predators have allowed deer herds to grow to unnatural densities.  White-tailed deer are one of the most common wildlife species in the eastern United States. Although enjoyed by many, high deer populations can negatively impact crops and native vegetation as the increasing numbers of deer seek out more food sources. The high numbers of deer also lead to an increase in motor vehicle collisions. These impacts are often most notable in areas where hunting is not permitted, such as in state and local parks.

A 2021 study of the White-tailed deer population was conducted by a group from Malone University.  Their deer density estimate at Quail Hollow Park ranged from 212 to 360 deer per square mile.

Biologists suggest that the optimal deer count in healthy forests is 15 to 28 deer per square mile. It is likely that the overabundance of deer at Quail Hollow Park is negatively affecting ecosystem function by spreading disease among the herds, damaging crops in the park’s surrounding areas, and stripping the forest floor of native plants.

In order to restore and maintain a balanced ecosystem, a deer management program at Quail Hollow Park near Hartville and Nimisila Preserve near Canal Fulton will be conducted by a lottery-based controlled archery hunt.

Lottery entries are now closed.   Emails were sent to the winners on Aug. 29, 2022.  Please check your spam or junk folders.

There is no entry fee to enter the lottery.  Lottery participants must be a Stark County resident.  Bow Hunters chosen will be eligible for a two-week session during Ohio Deer Archery season and assigned a zone in the order they are selected in the lottery.  Those selected will be permitted to bring one hunting companion with them.  Available slots begin on Sept. 24, 2022 and run through Jan. 27, 2023.

Both the hunter and companion must attend a qualification session.  (Companion does not need to be a Stark County resident)
Upon successful completion and passing the qualification, the hunter will pay a $50 fee to reserve a site for a two week period.

Qualifications will occur on several dates and times between September 1-September 23 at Tam O'Shanter Park and Quail Hollow Park.

Several qualification sessions are offered below and required.  A successful applicant and their designated companion will need to attend one of the offered sessions.  To qualify, each applicant must be able to place at least four out of five arrows in a 10" diameter target from a position at 20 yards.

To encourage harvesting anterless deer, successful applicants and their designated partners will be required to show a valid deer management permit at qualification along with a valid hunting license.

Hunting sessions for Quail Hollow Park and Nimisila Preserve will be held the following dates:

Information about Waterfowl Hunting Sites and Hunting Zones at Deer Creek and Walborn Reservoirs can be found here. 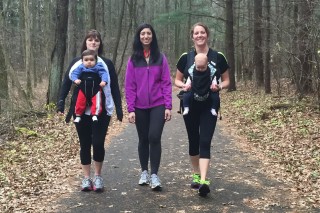